The normal flora of the human body refers to the microbial community that colonizes on the skin and mucus membrane. Normal flora is sometimes called indigenous microbiota, as they reside within or on the human’s skin surface.

Diverse microflora such as bacteria, fungi and some protists are associated on or within the skin surface. Among different microorganisms, gram-positive bacteria (Staphylococci and Micrococci species) prevail.

The normal microflora usually does not harm or aids the hosts. However, any disturbances in the normal microflora may give rise to opportunistic pathogens that may harm the host cells. Some indigenous microbiota generally exists as commensals, which means one partner benefits and the second one remains unaffected.

Therefore, we can say that the normal microflora show three kinds of relationship with the host, namely mutualism, parasitism and commensalism. In this context, we will discuss the definition, types and characteristics of the normal microflora along with their presence in or on the different sites of the human body.

The normal flora merely refers to the population of microorganisms like bacteria, fungi and few protists, which typically colonize at the specific anatomical sites of the human body. The surface tissues (skin and mucus membrane) of the human body are generally non-sterile.

However, the internal organs and tissues (spleen, liver, pancreas, bladder, blood vessels etc.) are generally sterile unless any infection occurs. In the human body, the normal microflora is predominantly grouped into resident and transient microflora.

The human microbiota are primarily classified into two groups:

Here, we need to remember that any disturbances in the population of resident microflora may consequence the colonization and proliferation of transient microflora, which produces diseases.

Characteristics of the Normal Flora

Distribution and Occurrence of the Normal Flora 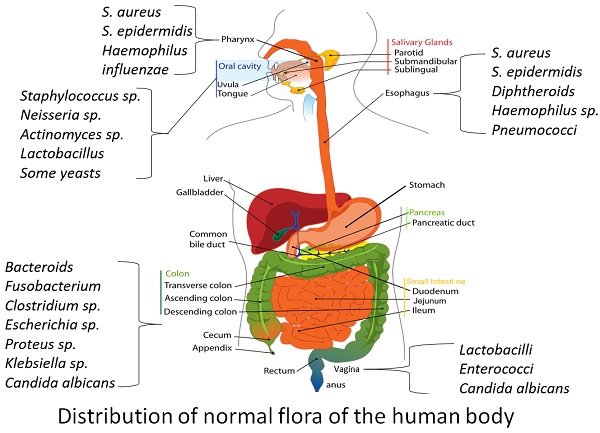 Starting with the external surfaces, the skin harbours 1000 to 10,000 microorganisms per square centimetre. A human skin layer possesses the outermost epidermis and inner dermis layer. Many bacterial species exist on the skin’s epidermis layer, which does not penetrate until there is no cut or abrasions over the skin surface.

Skin is the largest organ exposed to the environment, and it daily counters with a large number of microbes. Factors like skin’s dryness, low pH and secretion of inhibitory substances discourage microbial colonization. The dry skin restricts microbial growth, as the condition is not favourable to them. 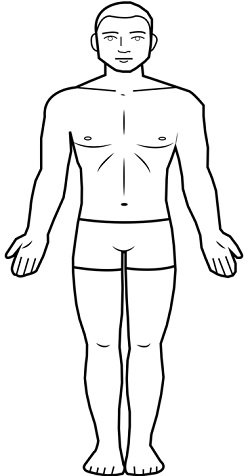 The moist regions like toe webs and groin area possess more normal flora (>10,000). The skin has a normal pH between 3-5 that also restrict microbial growth. The specialized glands within the skin (sweat and oil gland) secrete some inhibitory substances that discourage bacterial growth.

The sweat gland produces lysozymes that cause bacterial cell-wall lysis. Inspite of this fact, some microorganisms (Staphylococcus epidermidis, Aerobic Corynebacteria and Diphtheroids) utilize the water, amino acids, urea, salts and fatty acids secreted by the sweat gland and grow on the skin surface.

Conversely, oil glands primarily produce complex lipids that break down into unsaturated fatty acid by some bacteria (Propionibacterium acnes), which becomes toxic for the growth of other bacteria.

This is what we call bacterial interference, where the growth of one colony inhibits the other. P. acnes serves as a normal skin inhabitant, and any disturbances may result in disfiguring inflammatory lesions or cause acne vulgaris.

The membrane that constitutes the lining of eyelids and eyeball is termed eye conjunctiva. It is a very delicate membrane, which contains sparse microflora due to the following factors: 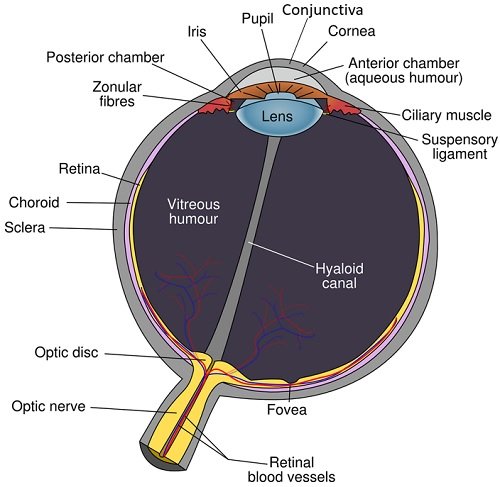 It provides a favourable environment for bacterial growth due to adequate moisture content and dissolved food particles. However, the factors like the continuous flow of saliva and desquamation of the epithelial cells exert mechanical flushing of the microorganisms from the oral cavity to the stomach’s acidic environment, where the digestive enzymes destroy many of the microorganisms.

Some microorganisms resist mechanical flushing and remain in the oral cavity. The normal microflora of mouth includes Staphylococcus, Neisseria, Actinomyces, Lactobacillus species and some yeasts. 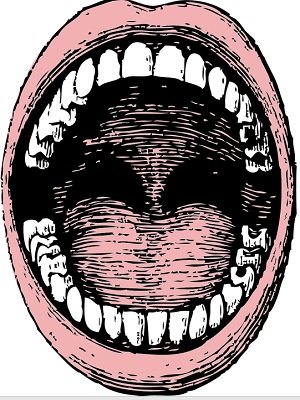 Aerobes and facultative aerobes reside within the mouth before the first teeth appear. But, the tissue surrounding teeth provides an anaerobic environment, due to which anaerobic bacteria like Bacteroides and Fusobacterium become more evident.

Besides, Streptococcus mutans adhere to the teeth surface by secreting extracellular glucan and primarily cause dental carries. Lactobacillus and Actinomyces species are the secondary invaders of tooth decay. Also, Trichomonas tenax (flagellated protozoan) sometimes appear in the gingival margins and tooth cavities.

Let us take a quick review in the upper and lower respiratory tract of the human body. 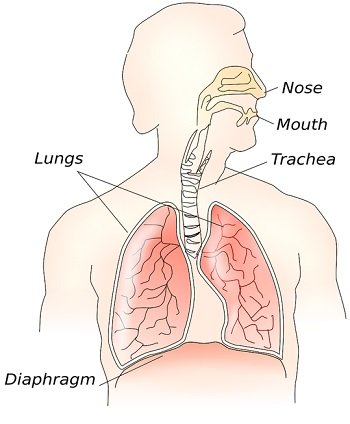 This region is free of microorganisms. The trachea and bronchi lack normal flora due to the cilia-driven upward movement of mucus. However, the microorganisms that enter the lungs’ alveoli are destructed by the alveolar macrophages via phagocytosis.

It receives numerous microorganisms from the oral cavity or nasopharynx. The stomach destroys the microbial cells by providing an acidic environment through the secretion of gastric juices (HCl). Lactobacilli and Candida species are evidently seen in the stomach.

It has a vast number of microbes, and the faecal matter comprises nearly a hundred billion bacteria per gram wet weight. Thus, a large intestine removes a large number of the microbial population through the peristaltic movement of the villi. 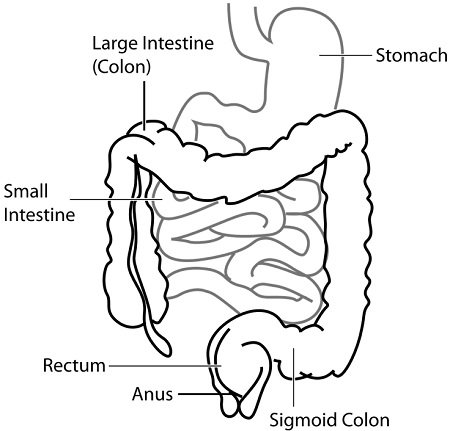 A breastfed and bottle-fed infants have gram-positive bacteria in their intestine until they substitute a liquid food by solid food. Thus, gram-negative bacteria (Bacteroides species) predominate in the intestinal flora of the adult-type diet.

The excretory system (kidneys, ureters and urinary bladder) is generally sterile, except for the urethra. The urethra of both males and females inhabit Staphylococcus epidermidis, Streptococcus faecalis, Corynebacterium and Neisseria species are significantly present. A female vagina inhabits Lactobacilli, Enterococci, Diphtheroids and Candida albicans. 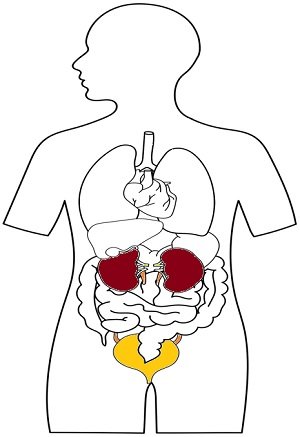 The normal flora serves as antigens, which can significantly induce an antibody-mediated immune response. Other bacteria compete with the normal flora of the human body to invade the nutrients of the host.

Any disturbances in the normal flora population make the host cell susceptible to pathogens. Therefore, the study of normal microflora gives us a better understanding of the infections to the specific site.

The source of infection can also be determined. We can study the medically important microorganisms excised from the infection site. In simple words, The normal flora of the human body influence the host cell susceptibility and morbidity.