Viroids are sub-viral agents, which exist as small infectious particles. They are somewhat similar to viruses but possesses some unique properties in their evolutionary origin, morphology and functions.

In 1917, Diener was the first scientist who discovered and termed the non-bacterial infectious plant pathogens as “Viroids”.

Potato spindle tuber viroids (PSTV) was the first viroid discovered by T.O. Diener and W.B. Raymer in 1967. PSTV caused massive damage to potatoes. Its discovery led to the existence of some infectious entities smaller than viruses.

Viroids refer to the small, non-cellular sub-viral agents, which exist as obligate intracellular parasites like viruses, but differs in property by lacking a protein coat. They are approximately 200-400 nucleotides long.

Viroid primarily infects, replicates and induces serious disease in higher plants. The pathogenicity of viroid differs within the distinct host species. Viroids cause latent infection, and they may also induce chronic infections in their host plants.

Viroids are classified into two families, depending upon the site of replication. 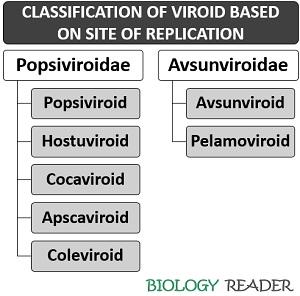 The members belong to this family replicate inside the plant cell nucleus (nuclear viroids) and formerly called group-B viroids.

The members belong to this family replicate inside the chloroplast (chloroplastic viroids) and formerly called group-A viroids.

Thus, the site of replication differs within the type of plant species. However, the replication mechanism follows the same strategy of three steps RNA-based replication. Its replication cycle is dependent upon the following three enzymatic activities:

Distinction Between Viruses and Viroids

Its genome size has a low molecular weight (1.1-1.3X105 Da). It can be characterized by the absence of protein coating surrounding the viral genome. Viroid’s genome lacks an AUG codon that mediates protein synthesis.

Viroid comprises a small fragment of RNA molecule that generally exists as a naked and circularized RNA. The genomic RNA consists of 250-370 nucleotides. The nucleotides in the RNA genome are usually paired, forming a dsRNA via intramolecular complementary regions.

Therefore, viroids resemble a rod-like structure, where the dsRNA appears as a closed, folded and 3D structure.

The folded regions of the viroid help in protecting the RNA against the action of cellular enzymes.

RNA polymerase, an RNase and an RNA ligase are the enzymes needed for viroid replication. Symmetric and asymmetric replication are the two replicative mechanisms of viroid. 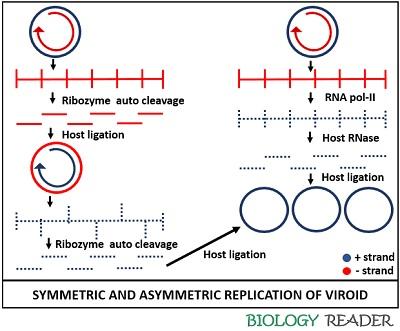 Members of the Popsiviroidae family undergo asymmetric replication, for which they primarily require a host cell enzyme (RNA polymerase II). The RNA polymerase II creates a nick in the cellular DNA by forming both positive and negative strands.

The positive circular strand will function as a template in producing new RNA via a rolling circle mechanism. Then, it initiates the synthesis of mRNA from the cellular DNA, and make a large linear multimeric (-) strand by using a viroid circular (+) RNA strand.

After that, Pospiviroids form (+) sense RNA from this long linear molecule via an asymmetric replication pathway. The (+) RNA strand of viroid is sensitive to the RNase activity of the host cell.

Avsunviroids lack a central conserved region and possess a ribozyme activity instead of RNA polymerase. Hence, the large multimeric (-) RNA strand is self-cleaved by the associated ribozyme activity.

Therefore, avsunviroids possess the property of auto cleavage. Then, the replication intermediates ligate into a (-) circularized RNA.

After that, a second rolling circle event takes place that makes a long linear (+) RNA strand. The ribozyme activity again cleaves the strand and eventually, the fragments of viroid RNA ligate into a (+) circular RNA.

DNA-directed replication is another mechanism, where the viroid RNA forms after the transcription of host cell DNA, complementary to the viroid RNA. The viroid RNA produces new DNA in the infected cell via association of reverse transcriptase enzyme.

The reverse transcriptase enzyme functions as an RNA directed DNA polymerase, which produces viroid RNA by using the infected DNA as a template.

After the study of these two replication modes, two conclusions have been made that the viroids can replicate via direct RNA to RNA copying, and the host cell machinery possibly promotes the replication of viroid RNA.