The quadrant streaking method is one of the streaking methods extensively used to obtain a pure culture. It helps to isolate a single colony or single species from the mixed culture. Streaking involves various patterns like a quadrant, continuous and radiant.

In the quadrant streaking method, a little inoculum is deposited on the first quadrant of an agar plate and successively spread over the remaining three quadrants. Separate microbial colonies mainly form on the third and fourth quadrants.

The isolated colony can be further cultured in the selective growth medium to know the growth pattern and cultural characteristics of the desired microorganisms. You can also perform the IMViC test (Indole test, Methyl red test, Voges Proskauer test and citrate utilization test) and other biochemical tests to classify the organism further.

This post describes the definition of the streak plate method. You will also get to know the meaning, objective, principle, procedure, advantages, limitations and significance of the quadrant streaking method.

It refers to the pure culture technique that involves inoculating the separated colony from the mixed culture (either broth culture or directly from the culture plate/slant) over the solid agar surface by moving the sterilized inoculating loop back and forth. Loeffler and Gaffkey introduced the streaking method. The streaking method is a dilution technique that dilutes the inoculum via successive streakings on the solid agar. Thus, it significantly produces individual or discrete colonies. 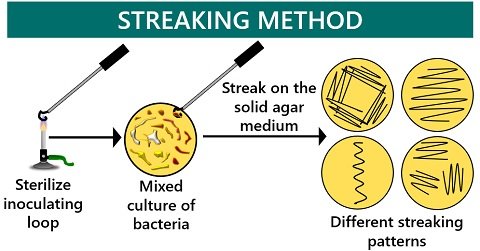 It is the common streaking method of isolating individual cells by preparing areas of dilution or quadrants. The colonies become thinner or isolated colony forms due to successive dilution of the inoculum by streaking the growth plate over four times. The individual microbial species grow and multiply to form a discrete colony or colony-forming unit. Quadrant streaking is a four-phase streaking method.

The quadrant streaking method’s principle involves inoculation of a little inoculum on successive quadrants of the solid agar surface. The number of organisms in the inoculum decreases by sequential streaking. Eventually, the inoculum is diluted to a point where a single bacterial cell growth occurs after every few millimetres on the agar surface. It uses a sterilized inoculating loop, swap or toothpick to make striations over the solid culture medium.

It basically involves the sterilization of all equipment, media preparation and inoculation of inoculum in the four successive quadrants by using a sterile inoculating loop each time. 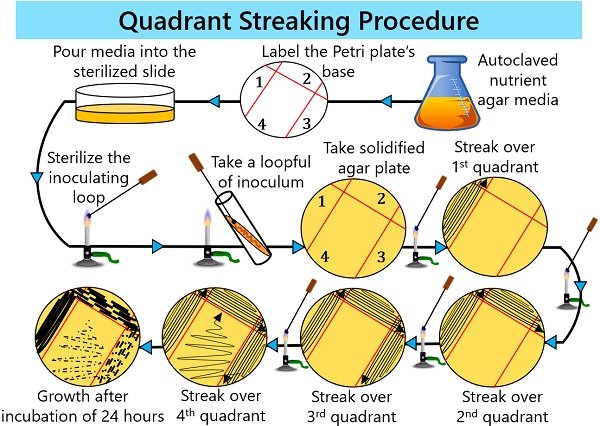 Some preventive measures should be considered while performing the experiment:

The quadrant streaking method is significantly used to separate a pure strain from the mixed population. We could examine cultural characteristics of the organism like colour, texture, size, and other microscopic and macroscopic properties by performing the quadrant streaking method. By adding antibiotics to the growth media, the sensitivity and resistance of the inoculated organism can be known.