But, the disaggregated amylose and amylopectin chains realign during retrogradation of a starch gel. We could see the retrograde starch after a long-term cooling or storage of the starch gel.

Boussingault introduced this process in 1852. Freezing is a factor aggravating the retrogradation process. Upon cooling, the amylose and amylopectin chains retrograde in a parallel fashion. Later on, the hydrogen bonds reform between the chains.

Then, it leads to the formation of a compact or crystalline structure of starch. But, the crystallinity of retrograded starch is not the same as the native starch granule.

Starch retrogradation refers to the recrystallization of starch upon cooling the starch gel. The process is thermoreversible. It involves the realignment of amylose chains. Also, it involves the aggregation of amylopectin chains into a more crystalline form. 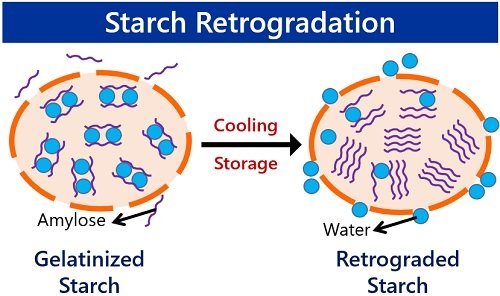 Or, we can say it is like a syneresis of starch gel. Syneresis is the discharge of a liquid or water from a gel. Likewise, water expels out of the starch granules during starch retrogradation.

How Does Retrogradation Occurs?

Retrogradation is an ageing process of viscous or gelatinized starch. Upon ageing of the gelatinized substance, amylose and amylopectin reassociate or recrystallize. Starch retrogradation has the following two stages:

It includes linear amylose chains. Amylose recombines in an irreversible manner to produce a crystal nucleus. It is a rapid process, as the reassociation becomes faster due to the linear structure of amylose. Emulsifiers may reduce the initial firmness or amylose retrogradation. 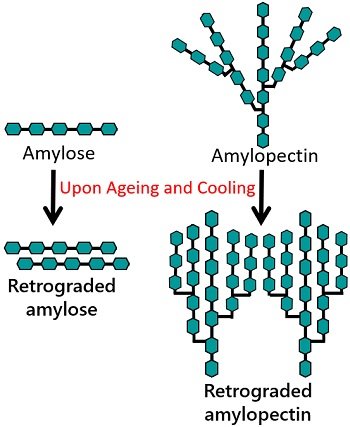 In the dough stage, starch molecules are in crystalline form. Here, the linear and branched chains of amylose and amylopectin appears

Then, the raw bread dough gelatinizes at about 150° C. The starch absorbs water, swells, and becomes semi-firm during this stage. After baking, the loaf is taken out of the oven. 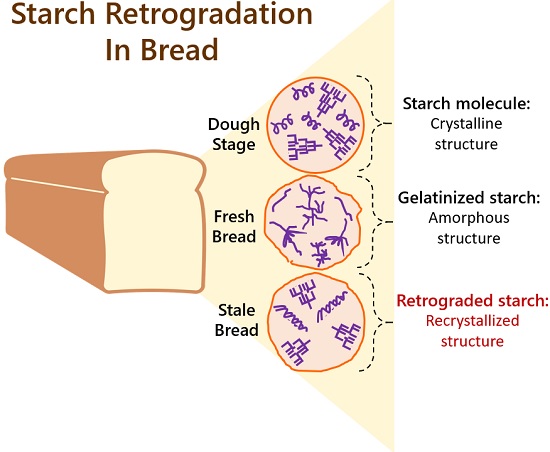 Upon ageing and cooling below the gelatinization temperature, the starch molecules recrystallize. The starch expels water, contract, and becomes harder during this stage. 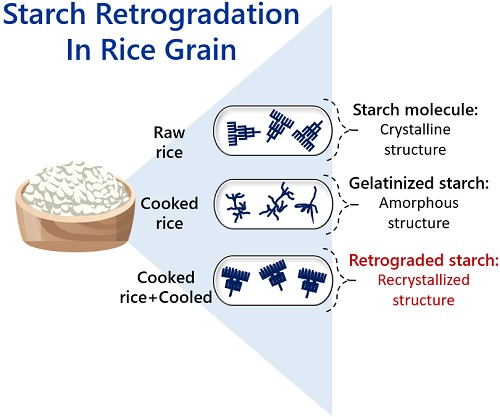 1. Type of starch: The retrogradation rate differs depending upon the starch type and composition. Starch with high amylose concentration retrogrades faster due to linear chain structure.

3. Proteins: These serve as emulsifiers. They have a negative effect on the retrogradation properties of the paste. Protein-starch complexes retard retrogradation during storage.

4. Lipids: Monoglycerides are lipids that interact with free amylose. Free amylose forms a complex at a concentration of monoglycerides >1%. Also, amylopectin-lipid complex forms. This interaction obstructs the amylopectin crystal formation. And, resulting in a decrease in retrogradation.

How to Prevent Retrogradation?

Some measures can prevent retrogradation.

By preventing retrogradation, we can increase the longevity of food items.