Seed dispersal is an essential mechanism through which spermatophytes or seed-bearing plants disperse their seeds via dispersal agents like wind, water, fruit explosion and animals. Seeds disperse into new sites where they grow or germinate under favourable conditions.

Seeds first grow into seedlings and later into well-developed plants and trees, thereby providing food, shelter and habitat to the organisms living there. Therefore, seed dispersal is an important mechanism to maintain plant diversity. In other words, seed dispersal refers to the detachment of the dispersal units (diaspores, propagules etc.) from the parent plant into different locations.

Seeds translocate into the different environments through abiotic and biotic means of transportation. Wind, water, gravity and self-explosion serve as the abiotic factors, whereas living beings are the biotic means of seed dispersal. This post explains the definition, key points and different strategies or agents of the seed dispersal mechanism.

Let us define “Seed dispersal” by breaking the term. We all know seeds are the reproductive structures only produced by spermatophytes (include flowering and cone plants). Ovules are the structures that develop into seeds after fertilization in plants. Later, these seeds serve as dispersal units through which plants undergo growth and fertilization. Dispersal means scattering and distribution.

Seed dispersal is categorized into the following types, depending upon the biotic and abiotic factors: 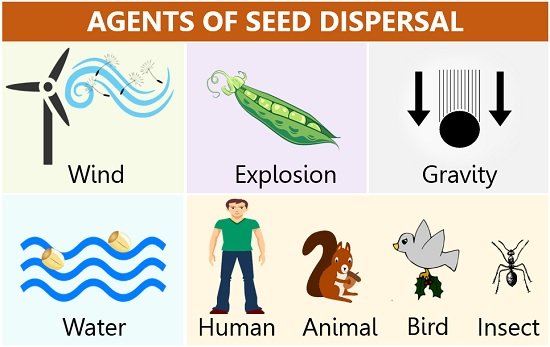 It is also called “Anemochory”. Here, the seeds may float on the breeze or flutter away on the wind. Seeds of dandelion and maple plants disperse into distant sites via wind or air. Airborne seeds possess the following characteristics:

Parachute seeds possess slender achenes or seeds with an umbrella-like crown of hairs on the top, as in dandelion seeds. Helicopters or whirligigs include seeds with a rigid or fibrous wing at one end, like maple seeds. 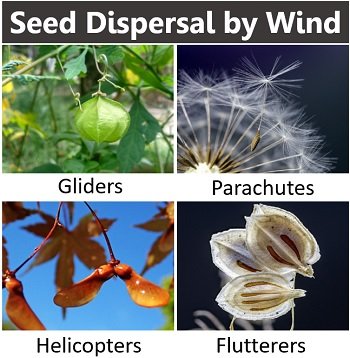 Flutterers or spinners include a papery wing surrounding the seed. These four are the standard group of plants that possess specialized seeds. However, non-specialized seeds may also undergo wind dispersal. Therefore, we can say that some plants use wind energy to scatter their seeds into far distant sites.

Some aquatic and terrestrial plant species use hydrochory to disperse their seeds. Waterborne seeds travel long distances by floating on the water. Aquatic plants living in the water bodies disperse seeds that float downstream the water and germinate at new sites. Conversely, the seeds of terrestrial plants fall in the soil during the low tide of water and travel long distances during the high tide of water. 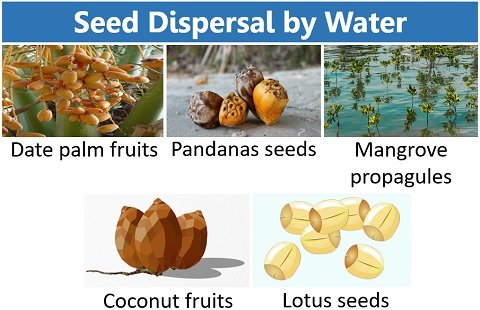 Some plants like pea and milkweed possess seedpods that shatter once they become dry. Seedpods split open and eject their seeds from the parent plant through a mechanism known as “Ballochory”. It involves explosive dehiscence of fruits due to changes in the turgor pressure and internal tension. Geranium species, Euphorbia species, Witch hazel etc., are examples undergoing ballochory.

Barochory is another mechanism in which fruits like apples, coconut etc., fall on the ground by the effect of gravity and further water, animals, birds etc., translocate the seeds and fruits to new sites. Therefore, autochory is a mechanism where plants disperse seeds by their own, without any external factors. 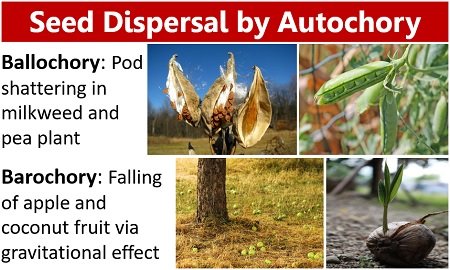 Zoochory and Ornithochory are the seed dispersal mechanisms carried out by the animals and birds. Hitchhiking on animals generally takes place through direct and indirect methods.

A few plant species possess adhesive spines and bards around the seeds. Such seeds indirectly adhere to the fur of animals and birds and thereby translocate into new locations through a phenomenon called “Epizoochory”.

In contrast, endozoochory is another mechanism through which animals and birds directly ingest the fleshy fruits and disperse seeds in the form of animal defecates and bird droppings. Myrmecochory is the seed dispersal mechanism carried out by the ants.

Ants carry seeds of myrmecochorous plants. They feed on the lipid-rich attachment around the seed called an elaiosome and later discard the seed in underground middens. Rodents like squirrels bury acorn seeds to save for later, and the seed grows into a new plant if they forget to return. 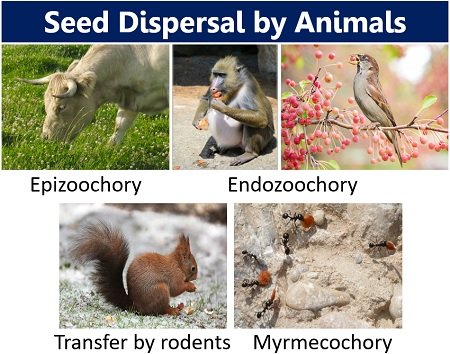 Seed dispersal by humans is called “Anthropochory”. Humans can transfer seeds to new locations through the following methods:

Plants increase their geographical distribution and population size by using different means of seed dispersal. Dispersal of seeds gives a fair chance to all the seedlings to grow well and allows colonization of plant species in different habitats. In addition, it also facilitates the interaction of the biotic and abiotic components with the different plant species.

Some groups of plants develop unique features to adapt or modify themselves relative to the conditions of the new habitat where they fall. Seed dispersal is the only significant mechanism by which some physical and biological factors scatter seeds to different locations.

It is the critical stage in the life cycle of plant species. Dispersal of seeds in space involves seed transport from the parent plant to the new site. The distribution of seeds in time refers to the inactivity of diaspores for a certain time. They become active or start a germination process by external stimuli or internal growth stimuli.