Transcription is the first stage of gene expression, synthesizing linear mRNA from the DNA specific sequences. It uses a template DNA strand to synthesize RNA with a similar base sequence of the coding DNA strand. The difference between template and coding strand is that the former moves in a 3′-5′ end and the latter moves in a 5′-3′ direction.

Bacterial transcription is the first stage of gene expression that occurs in the bacterial cell cytoplasm. It only needs RNA polymerase holoenzyme to synthesize all the types of RNA (mRNA, tRNA and rRNA). Additionally, protein factors like sigma and rho protein are necessary to regulate transcription.

Bacterial transcription typically involves three stages abortive initiation, elongation of mRNA and stalling of RNA polymerase by intrinsic RNA sequences or rho factor. Primarily, specific binding between RNA polymerase and the promoter sequences is necessary. Before transcribing mRNA, the unwinding of the DNA helix by the RNA polymerase becomes necessary near the gene that is getting transcribed.

As a result, a transcription bubble forms with two exposed DNA strands (coding and template strand). Transcription only utilizes the template DNA strand to produce RNA in the 5’ to 3’ direction by adding nucleotides one by one to the free 3’-OH end. The RNA polymerase dissociates via intrinsic or rho-dependent termination after transcribing 10-12 bps long RNA.

Central dogma: According to the current bioinformatics concept, transcription is the first stage of gene expression where the genome is transcribed into the transcriptome by the DNA-directed RNA polymerase. The genome is the total DNA contained in an organism. The transcriptome is the RNA or the initial product required to synthesize proteins or serves as active protein-coding genes.

It involves the following stages depicted in the diagram below. 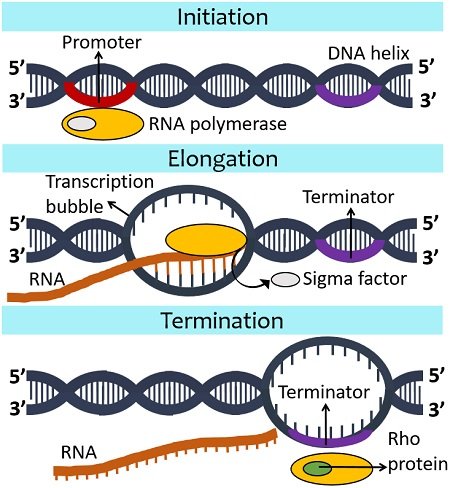 It is the primary stage of transcription. Here, the RNA polymerase binds to the specific sequence or promoter region of the coding DNA strand. The majority of bacteria have two consensus sequences (-10 and -35) in the promoter region.

RNA polymerase is the core enzyme that alone cannot initiate transcription or recognize the promoter region. RNAP needs a sigma factor to function as a holoenzyme or complete enzyme. A sigma factor or subunit binds to the core of RNAP. It plays a crucial role in recognizing the consensus sequences in the DNA and promoting specific binding between RNAP and the promoter region.

Afterwards, the RNAP slightly modifies its shape or generally stretches itself (upto 60-80 base pairs) to reach the promoter region because, at the very start, RNAP adheres far away from the promoter site.

The base sequence of newly formed RNA is similar to DNA coding or positive sense strand (except for the nitrogenous base uracil). During elongation, RNA polymerase synthesizes RNA through one of its catalytic properties. Unlike DNA polymerase, RNAP does not need primer. Elongation of the ternary complex involves the following stages:

The palindromic sequences in the RNA produce stem and hair loop structure due to GC-rich regions. RNAP dissociates from the DNA template strand, thereby terminating transcription. Conversely, a rho protein directs the rho-dependent termination. It is the hexameric helicase enzyme that binds to the rho-utilization site or rut-site of the growing RNA.

Rho runs along the path of growing RNA towards the RNA polymerase, thereby dissociating RNAP and destabilizing the interaction between the template and mRNA. Finally, the transcription product, i.e. mRNA released from the elongation complex, is generally inactive. It goes through some post-transcriptional modifications to become functionally active.