A plant cell nucleus is a specialized structure, which stores genetic information and monitors cellular activities. Plants are monokaryotic cells, which possess an individual nucleus. A well-developed nucleus is only found in the advanced or multicellular organisms, those having division of labour.

Nucleus presence is a prominent feature in plant cells, as it plays a pivotal role in regulating metabolic activities, cell growth and reproduction. The number of the nucleus varies among different groups of organisms, but a plant cell only possesses a single nucleus.

A plant cell nucleus has a complex structure that possesses nucleoplasm and nuclear envelope as the two major elements. A nucleoplasm mainly comprises spherical nucleolus, chromatin threads and nucleus sap. The unorganized chromatin material condenses into the DNA material at the time of mitosis.

The nucleus can be defined as the eukaryotic cell’s core material that directs the overall cell’s activity important for cell growth and differentiation. It closely resembles a kernel of the stone fruit. A nucleus has two concentric membranes whose primary function is to safeguard the DNA from the reactions occuring in the cytoplasm. But, it can communicate with the cytoplasm via a nuclear pore complex that allows selective import and export of the materials within the plant cell.

A plant cell nucleus appears spherical and located centrally. It constitutes 10% of the plant cell’s volume. The nucleus of the plant cell is surrounded by a double-layered membrane or nuclear envelope, within which nucleolus, chromatin material, and karyoplasm are present. A nuclear envelope protects the contents within the nucleus and also differentiates the nucleoplasm contents from the cytoplasmic contents.

Nuclear pores on the nuclear envelope also facilitate nuclear and cytoplasmic exchange within the plant cell. A chromatin material contains genetic information, and the nucleolus participates in the synthesis of ribosomes.

Parts of the Plant Cell Nucleus

The plant cell nucleus is the specialized cell organelle that contains chromatin, nucleolus and nucleoplasm enclosed by a layer of the perforated nuclear envelope. 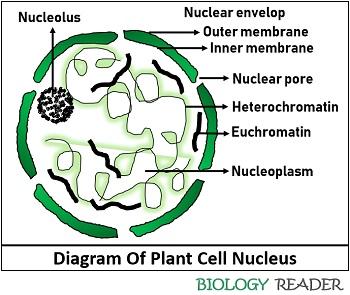 Chromatin carries the DNA in a much-condensed form because of the large content of the DNA that carries gene coding, both structural and non-structural proteins. Therefore, eukaryotic cells like plants possess closely packed DNA that seems like beads (histone proteins) around a strand (DNA).

Histones are the DNA-binding proteins that keep the DNA intact, by which the chromatin threads appear as condensed fibres. Packing a huge content of genetic material into a small nucleus is an incredible way of packaging.

At the time of DNA packaging, each DNA strand is coiled around the small bead-like structures, or protein molecules called histones. The configuration formed by the twisting of DNA (two turns) around the histone octamer is termed a nucleosome or solenoid model. Chromatins are semi condensed structures. On microscopic observation, they look like beads on a string.

Nucleosomes are condensed by a factor of six and later coiled even more by a factor of 40, by which the localization of DNA takes less space. Positively charged histone proteins neutralize the negative charge on the DNA.

A chromatin material generally exists in two forms, depending upon the gene transcription.

We sometimes get confused between the two terms (chromatin and chromosome), but there is a difference between these two. Chromatin transforms into a particular type of condensed form (Chromosome) at the time of metaphase  (the cell prepares to split).

Firstly, the chromatin strands make copies of themselves via DNA replication. Later, the chromatin material becomes highly compressed to the degree of 10,000-fold and turns into chromosomes. After cell division, chromosomes separate by giving a complete blueprint of genetic information to each cell.

It appears as a spherical mass that lacks a membrane around it. Nucleolus plays a significant role in building up ribosome subunits, which in turn helps in protein synthesis. On microscopic observation, it appears as a small patch inside the nucleus. The nucleolus is only noticeable after a cell divides. Therefore, it functions as a site that provides necessary ribosomal proteins and rRNAs for ribosome biogenesis. In the majority of plant cells, this region contains a high concentration of iron.

Edouard Van Beneden coined the term. Karyoplasm and nucleus sap are the alternative terms of the nucleoplasm. It appears as the homogeneous and colloidal liquid of variable consistency. Nucleosol constitutes the soluble liquid portion. Karyolymph contains an emulsion of various suspended bodies like nucleoproteins, nucleic acids, proteins and enzymes. It generally appears gelly-like.

As we have discussed earlier, a nuclear envelope is punctured with several cavities called nuclear pores. A large complex of proteins encircles nuclear pores that regulate the nuclear and cytoplasmic exchange of the specific materials within plant cells.

The nuclear pores permit free diffusion of polar molecules, metabolites and ions within the cell by blocking the majority of large molecules. Thus, the nuclear pore complex provides a channel for the back and forth exchange of materials within nucleoplasm and cytoplasm instead of a barrier, i.e. nuclear envelop.

The molecules that are entering and leaving the nucleus carry specific amino-acid sequences. Molecules carrying specific nuclear localization signals or nuclear import sequences label specific proteins that the nucleus can take up.

Therefore, proteins (like histones) can enter the nucleus for the packaging of DNA from the cytoplasm. Similarly, RNA transcript and some protein precursors possess nuclear export sequences that the cell cytoplasm can take up.

The nucleus functions like a room allotted for the storage of genetic material. It performs the following significant tasks inside the plant cell:

Therefore, we can conclude that the plant cell nucleus possesses a complex structure that houses nuclear contents very precisely inside a small nucleus. Apart from the small size of the nucleus, it acts as a command centre for all cellular activities that decide the cell physiology, morphology, growth and division.