The root system in the soil also influences a wide range of microorganisms, which show intense metabolic activity in the rhizosphere and known as rhizospheric microorganisms.

Bacteria, fungi, algae and protozoa constitute the microbial menagerie, whose number may reach millions to billions per gram of soil. Therefore, it is difficult to enumerate the number of microorganisms present in the soil.

To determine the number of microorganisms, we could perform culturing methods and microscopic examination. In this post, we will study the definition, important terms and different groups of soil microorganisms with examples.

They constitute the soil microbial population, in which each group has a significant role in promoting soil and plants health. Microbial community living within or on the soil system form a soil food web.

Like the food web, the soil food web also represents the complex living system where all the soil microorganisms interact with the biotic components of the ecosystem, including plants, animals and humans.

The organic matter of the soil, i.e. plant’s and animal’s wastes, serve as the producers or contribute to the first trophic level of the soil food web.

Then comes the category of primary consumers, which includes decomposers and mutualists (like bacteria and fungi) and contribute to the second trophic level. 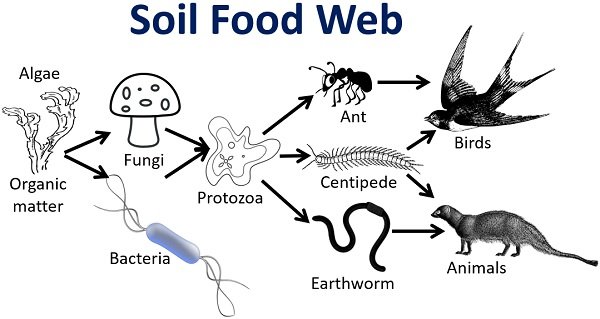 Let us discuss few of the important terms to know the concept of soil microflora.

They are less than 0.1 mm in size. Nematodes and protozoans are the soil microfauna, which attacks the primary decomposers and mutualists (bacteria, mycorrhizal fungi and saprophytic fungi).

Thus, they function as predators as well as parasites (cause crop diseases). They are generally root feeders and some feeding on the soil particles and the thin water film.

It primarily includes bacteria and fungi. Bacteria are numerous, and they participate in various soil transformation processes like weathering of rocks, breakdown of organic matter and nutrient recycling. Fungi are also important for the decomposition process, and they also help in soil aggregation and restoring nutrients. 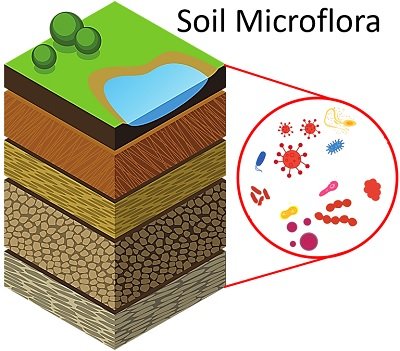 It is a branch of science that deals with the study of soil microbiota, their functions and ecological impact on soil.

The number and variety of bacteria predominate over the other groups of soil microorganisms. Their number exceeds several million to billions in one gram of soil. Direct microscopic and plate count methods are generally employed to enumerate the number and different groups of bacteria in the soil.

The bacterial population is influenced by the changes in the soil pH, temperature, moisture content and nutrients availability. Based on the function, bacteria within the soil are broadly classified into the following groups.

They split nitrates back into the atmospheric nitrogen, thereby decreasing the nitrogen fertility of soils.

Rhizobium is a mutualistic bacteria that associates with leguminous roots to fix atmospheric nitrogen within the soil by forming root nodules. Azotobacter, Azospirillum and Clostridium species are the free-living nitrogen fixer.

Soil bacterial population also includes some species that produce antibiotics, which protect the plants from disease-causing or pathogenic organisms or plant pathogens.

Diverse bacterial populations maintain the equilibrium in the soil ecosystem by competing for the same nutrients, minerals and water.

Some bacteria (like Thermothrix, Thiobacillus etc.) split sulfides (present as soil minerals) into sulfates. Plants cannot utilize sulfides, for which sulfides must be converted into the usable form that a plant can consume.

They are the type of filamentous bacteria, which gives a characteristic smell, structure and texture to the soil by secreting compound geosmin. They decompose the organic residues like chitin, lignin etc., like fungi.

A fungal cell can be single or multicelled. There are thousands to several hundreds of different soil fungi, which may exist as mycelium network and fungal spores.

The majority of fungi (moulds) inhabit near the soil surface where they can prevail sufficient oxygen. Conversely, yeasts or unicellular fungi inhabit deep inside the soil, as they require anaerobic conditions to grow.

Fungi are the active decomposers that degrade the complex or woody organic matter (cellulose, chitin, lignin and pectin) that are hard to decompose by the bacteria. They also help play a crucial role in securing nutrients by immobilizing soil nutrients.

They are multicellular and expands their hyphae deep into the soil, forming a dense network called mycelium. The mycelium entangles to promote binding or aggregation of the soil particles. They form water-stable soil aggregates.

They produce fungal enzymes and some antibiotic-like substances, which restrict the growth of other fungi, other groups of soil microorganisms and pathogens.

Arbuscular mycorrhiza (VAM) are the fungi having arbuscles. These growths are formed inside the cortical cells of the plant’s root that have many small projections into root cells.

Their hyphae extend outside the root, which increases the soil-plant interaction. They improve the availability of water and nutrients and also protect the roots from pests and pathogens.

Some fungal spores of the members like Phytophthora, Rhizoctonia and Pythium species decompose the living tissue by showing visible symptoms like lesions, blisters, wilting etc. The spores of pathogenic fungi remain dormant in the soil.

Among different groups of bacteria and fungi, the number of algae is somehow less (100-10,000). Green algae and diatoms predominates in the soil. They usually inhabit the ground surface or the layer below it, to carry out photosynthetic and other metabolic activities.

There are three main groups of algae in soil habitat.

They contain chlorophyll and pigments and generally appear blue-green to violet in colour.

They only possess chlorophyll and seem green.

They appear brown and possess chlorophyll as well as pigments.

The accumulation of the cyanobacteria over the exposed surface of the rocks provides the organic matter or the nutrient base for the growth of bacterial and fungal species.

They play an essential role in transforming rock into soil by supporting the growth of lichens, mosses, and later on the higher plants due to continuous deposition of the organic matter and dissolved minerals over the rocks.

They maintain soil fertility, especially in tropical soils. Algae provide the organic matter for bacteria and fungi growth and increase the amount of organic carbon in soil once they die. They serve as a cementing agent that facilitates soil aggregation and holds more water and nutrients within the soil.

Algae go through photosynthesis and liberate oxygen into the soil by splitting atmospheric carbon dioxide, thereby facilitating submerged aeration. They also promote weathering of rocks and the building up of soil structure.

Flagellated protozoans and amoebas are prevalently found in moist soils. They mainly feed on bacteria. They are unicellular, colourless, appear larger than the bacteria and exist predominantly in the surface soil.

They are the smallest creatures among the members of the protozoa group. Nonchlorophyll-containing flagellates are found prevalently in soil and do not undergo photosynthesis.

Chlorophyll-containing flagellates are common in aquatic habitats. Flagellates are characterized by their distinct flagella, which number and arrangement vary among different species.

They appear comparatively larger than the flagellates. Unlike flagellates, amoebae move through their pseudopodia or irregular projections. A pseudopodium or “false foot” not only helps in movement but also helps to phagocytose the food particles in the surrounding.

They appear largest and move through cilia through beating movements. Cilia seem like tiny and short hairs. They can move in different directions.

Protozoans serve as the predators, which maintains the equilibrium of microorganisms in the soil. They are also used as biocontrol agents to control plant diseases.